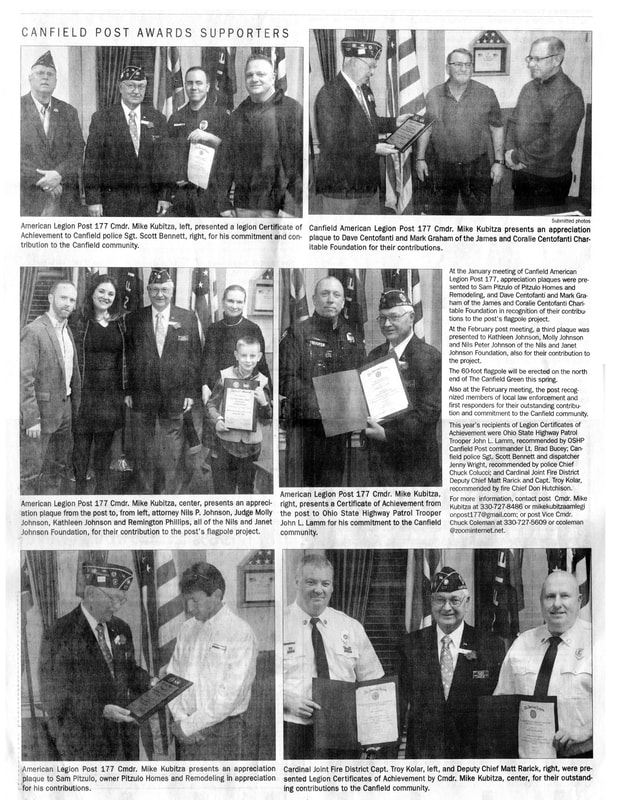 At our February meeting, we presented another Appreciation Plaque, this time to the Nils and Janet Johnson Foundation in recognition of their generous contribution to the Post Flagpole project.
Also, during the same meeting, the Post recognized local law enforcement and fire personnel for their outstanding services to the community in 2019.
JANUARY 7, 2020

At the January meeting of Post 177, Appreciation Plaques were presented to Sam Pitzulo (Pitzulo Homes & Remodeling) and Dave Centofanti & Mark Graham (James & Coralie Centofanti Charitable Foundation) in recognition of their generous contributions to the Post's Flagpole project.  The sixty (60) foot flagpole will be erected on the north end of The Green in Spring 2020. 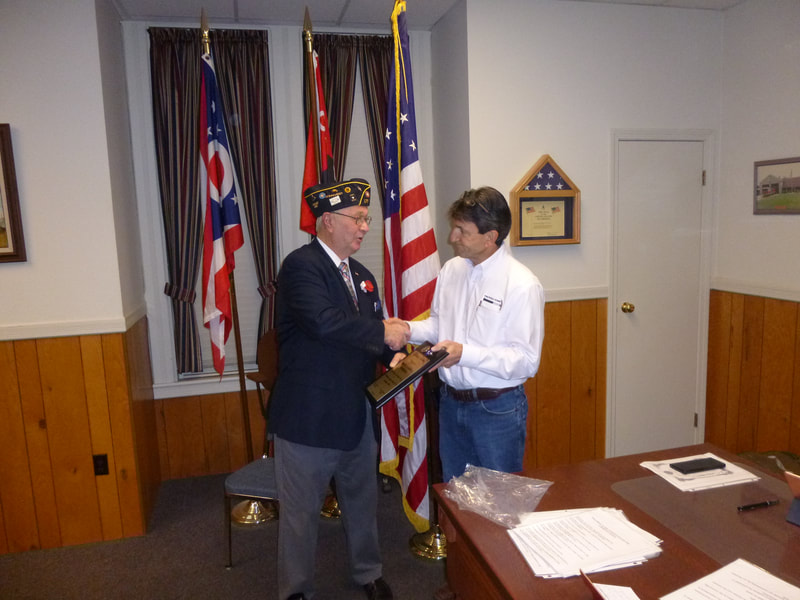 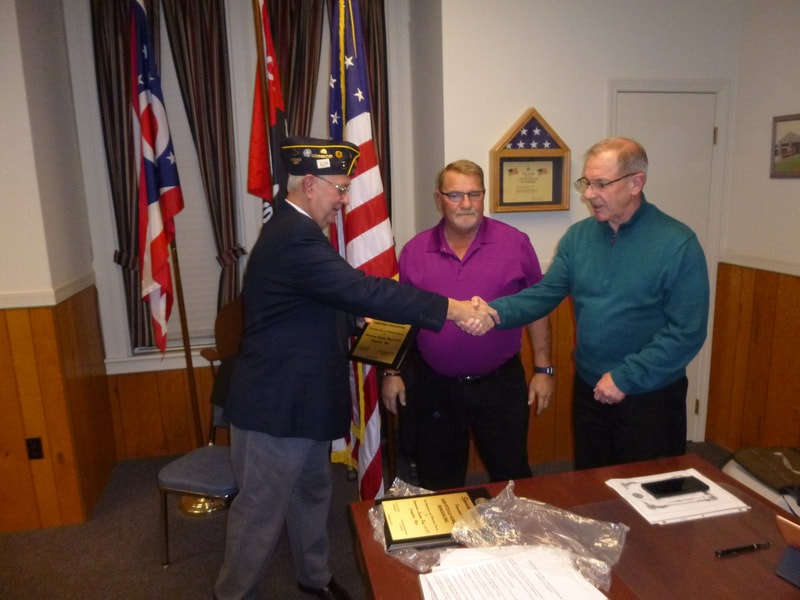 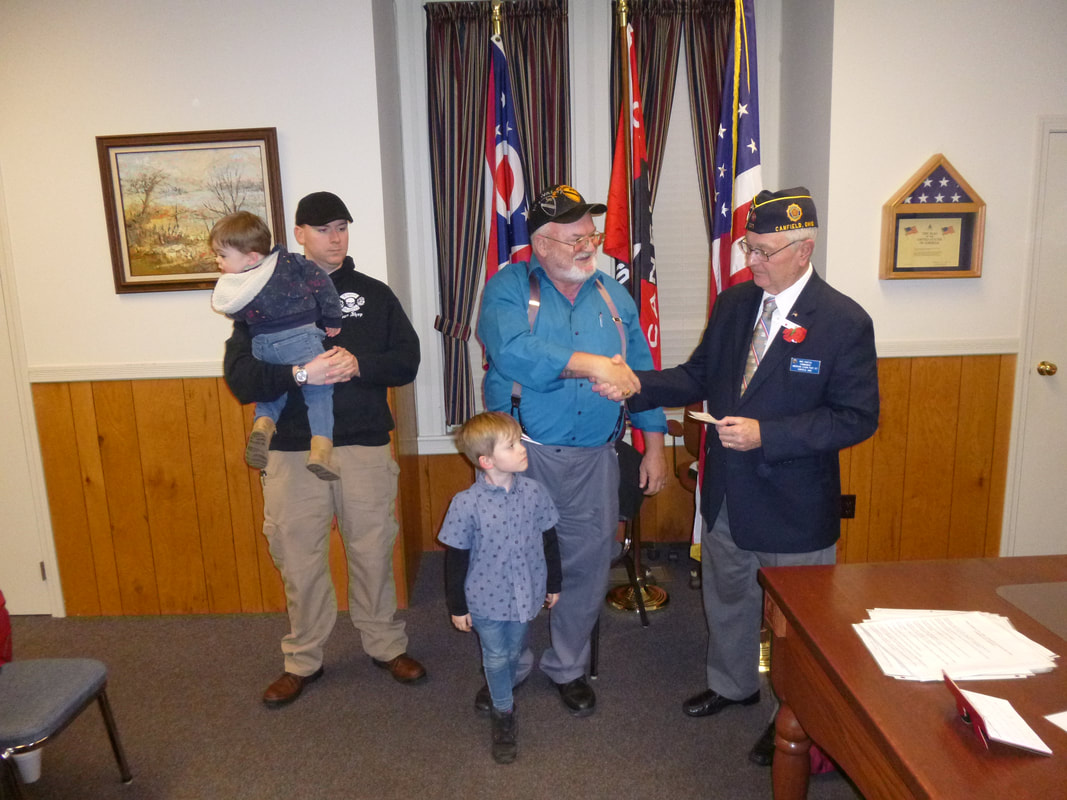 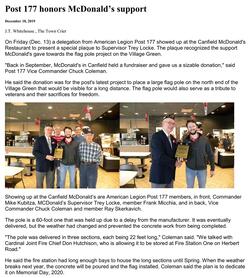 On December 7, 2019, the Post held its annual Christmas Breakfast Meeting at Davidson's Restaurant in Cornersburg.  Once again - owing to the graciousness of owner Frank Davidson - the breakfast meal was provided at no cost to Post members and guests.  Photos below are evidence of the greta time that was had by all in attendance..
This past Veterans Day, in addition to participating in activities at the two (2) Canfield elementary schools, members of the Post visited veterans at several local nursing homes and care facilities.  The photos below show some of those veterans.
On November 13, 2019 at St. Michael's Church in Canfield, six (6) of the nine (9) young men the Post sponsored to Boys State 2019 provided insights into their experiences.  Several members of the Post and Post Auxiliary were in attendance, as well as many of the boys' parents.  Refreshments were provided by the Post 177 Auxiliary.  The boys who attended Boys State 2019  were Joseph Bruno, Jacob Fay, James Hartshorn, Joseph Scolieri, Connor Sigler, Nickolas Goodrich, Robert Smallwood, and Samuel Moore.
On Veterans Day, several members of Post 177 were honorees at the CH Campbell Elementary School Annual Veterans Day assembly.  This is an annual event during which the students relate the history and meaning of Veterans Day and sing patriotic songs.  Additionally, every veteran in attendance is presented with a small flag that has flown over the grave of a veteran buried in one of the Canfield cemeteries.  Guest Speaker at the assembly was Richard Taaffe, US Army 1957-1960 and former Principal of CH Campbell.  Following the CH Campbell event, a half-dozen Post members went to Hilltop Elementary School and visited the 4th grade classrooms to discuss veterans and the military.
On October 12, 2019 the Post 177 Auxiliary hosted the Auxiliary District 09 conference.  Post 177 First Vice Coleman provided the ladies with an update on the status of post 177 including the many activities in which we are involved. 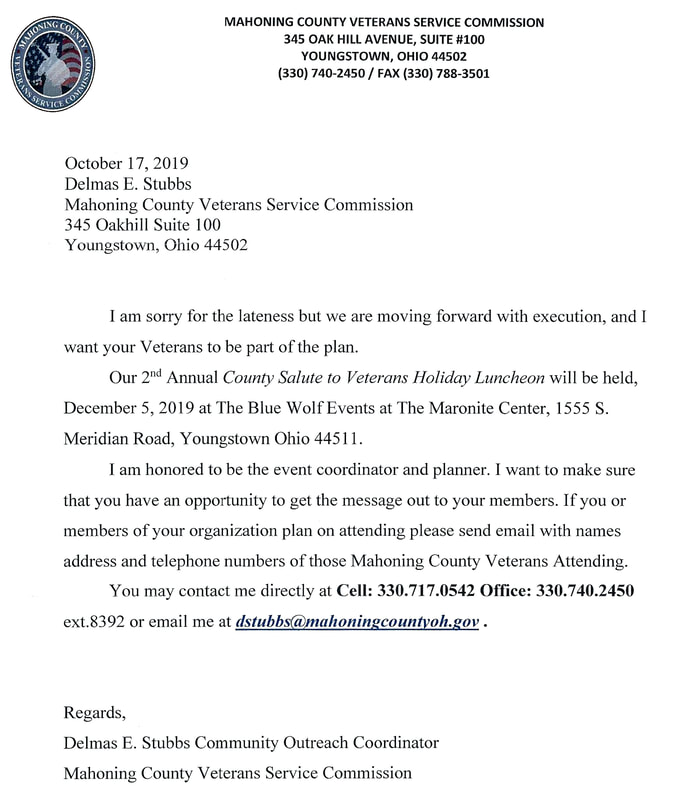 At the October 2, 2019 Canfield City Council Meeting, local businessman Sam Pitzulo presented Commander Kubitza with a check for $3,100 to be applied to the Canfield green Flagpole Project.  Following the check presentation, Mayor (Chaplain) Duffett presented Mr. Pitzulo with a proclamation from the City of Canfield in recognition of his contributions to the Canfield community.  Several Post members attended the ceremonies. 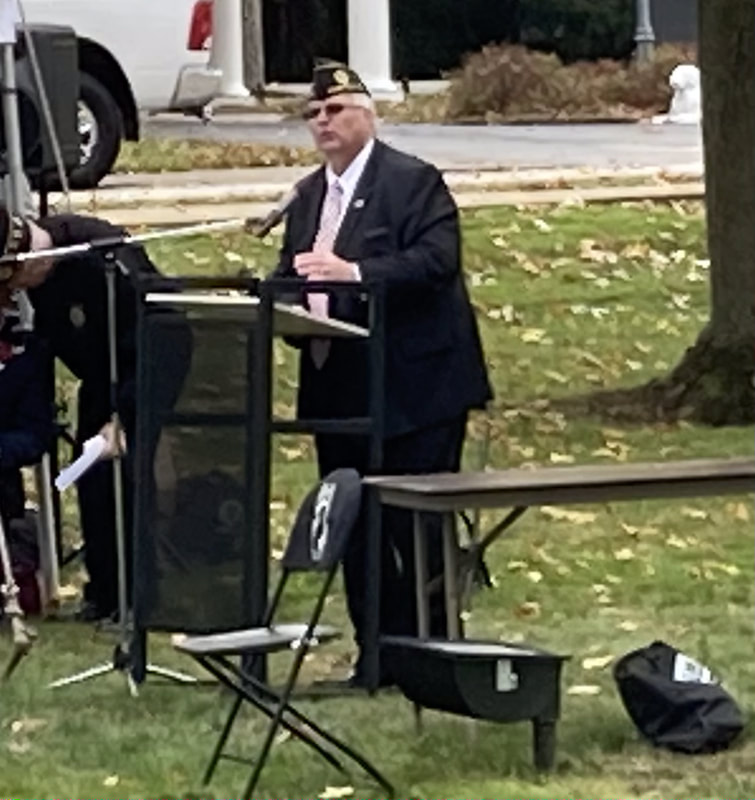 Chaplain Duffett presents Commander Kubitza with a check for $4,600 - proceeds from the 2019 Till open to benefit Post 177 Legion and Auxiliary. 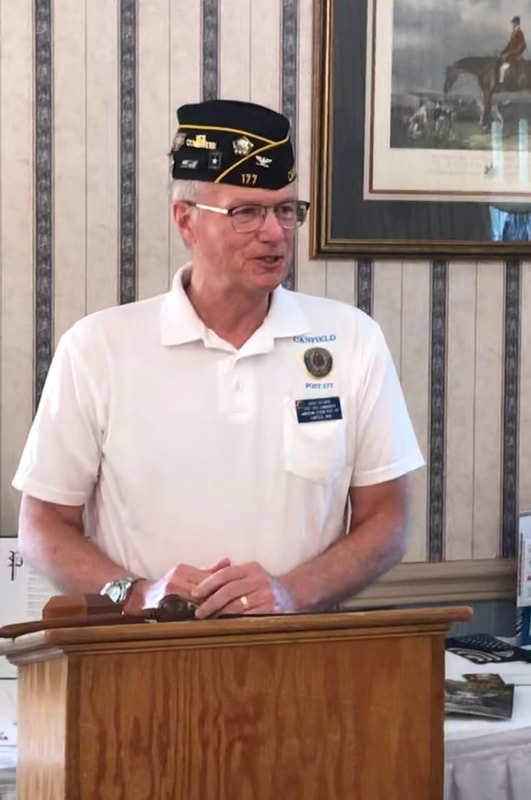 First Vice Coleman offering his views on the Legion's 100th birthday (9/16/19) to the Mahoning Chapter, DAR.

Application to participate in the "Honor Flight" program can be downloaded by clicking here. 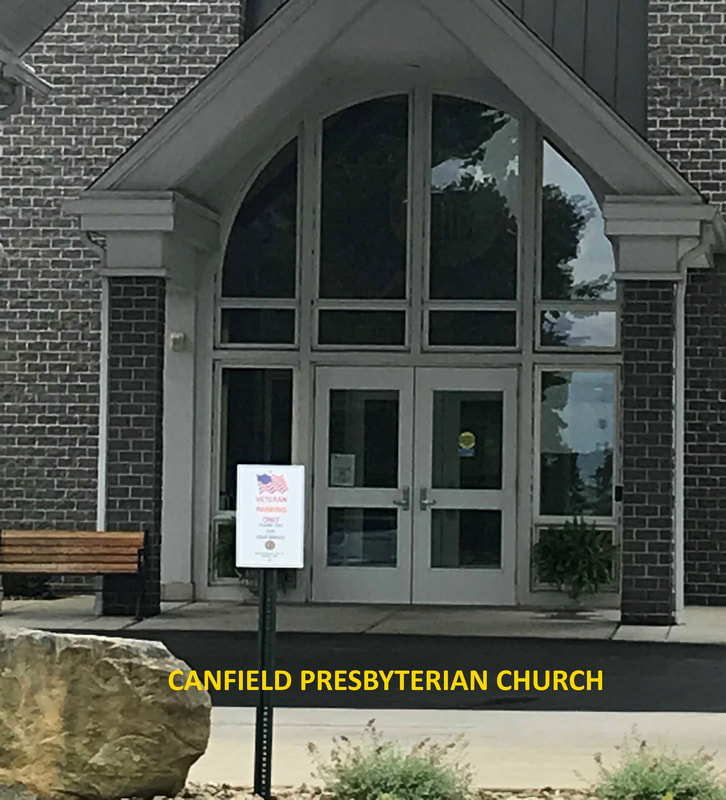 On September 7, 2019, Eagle Scout Justin McLemore dedicated his Washingtonville Trinity Lutheran Cemetery restoration project to the public.  Post 177 was a sponsor for this exceptional effort by Justin.  In attendance were the Post Adjutant, Susan Sansenbaugher, First Vice Commander Chuck Coleman, as well as the Post Rifle Squad, led by Ray Pfahl.
Photos from the 2019 July 4th Parade in Canfield below.
Photos from the 2019 Memorial Day Services below.
Post 177 Services Officer Susan Sansenbaugher delivers the keynote address at the Beaver Township Memorial Day services.  Photos and video below. 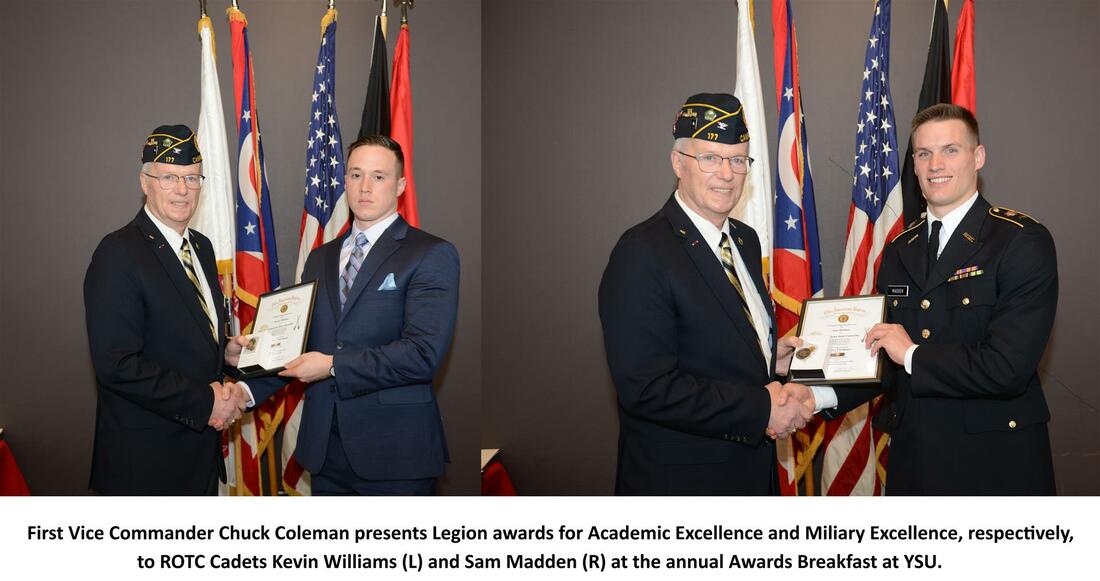 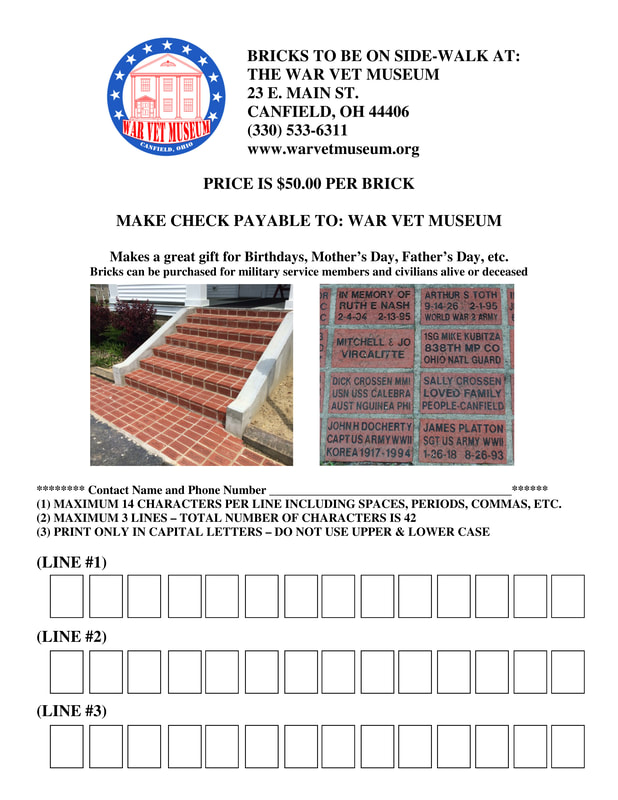 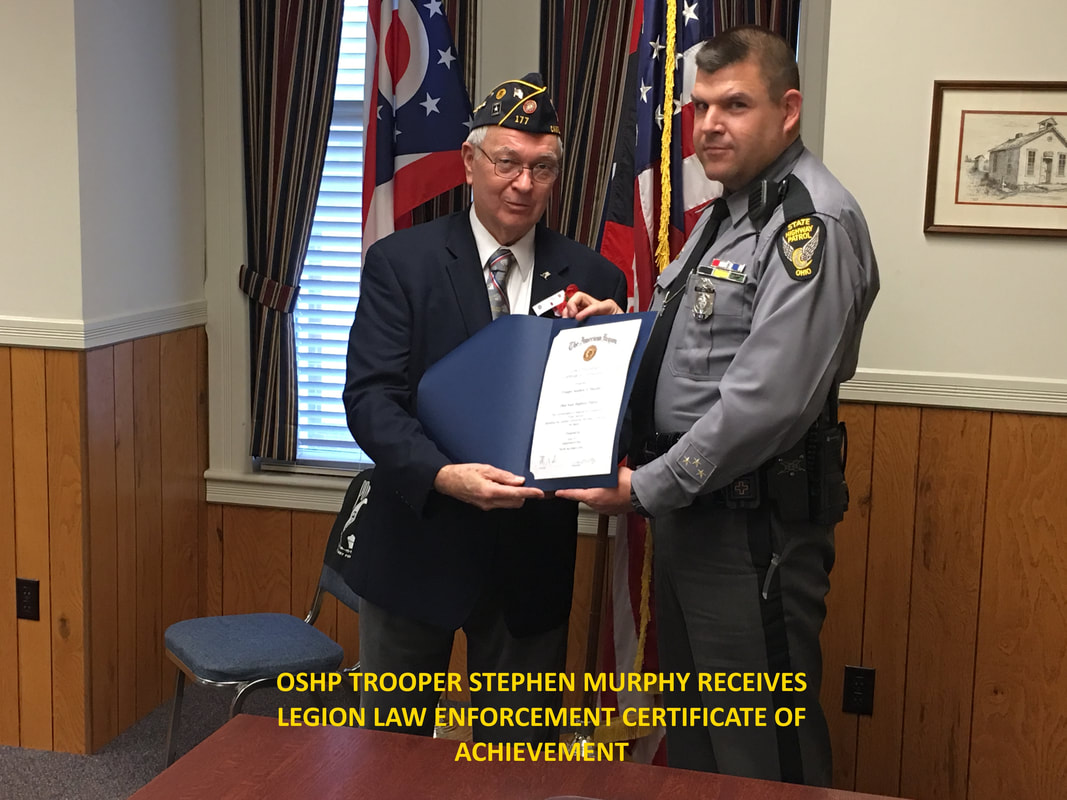 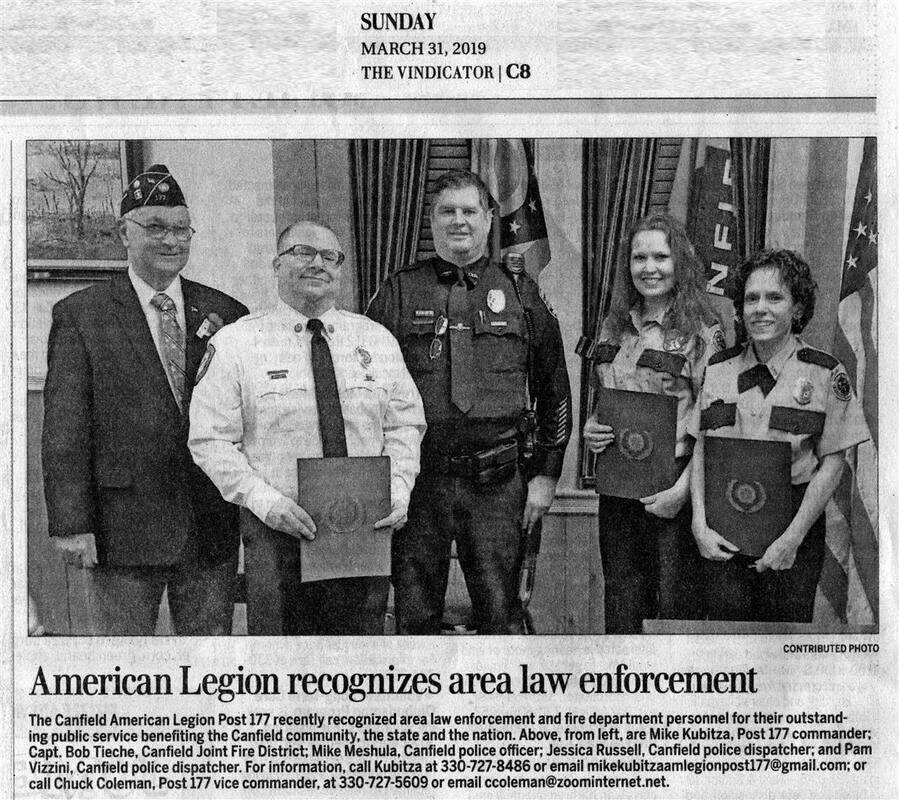 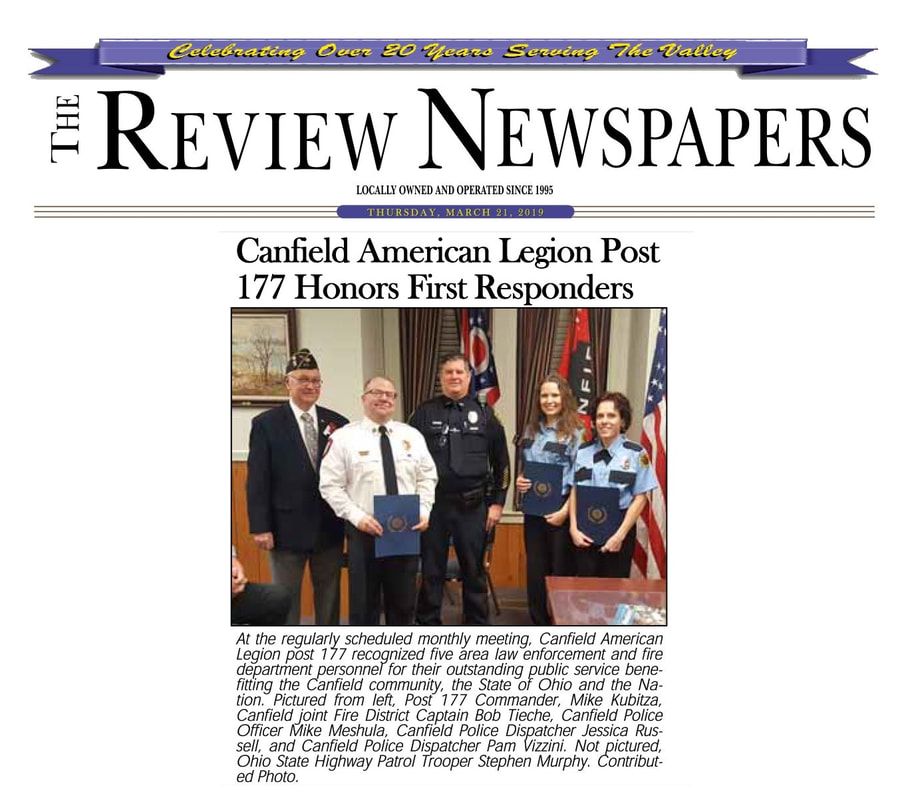 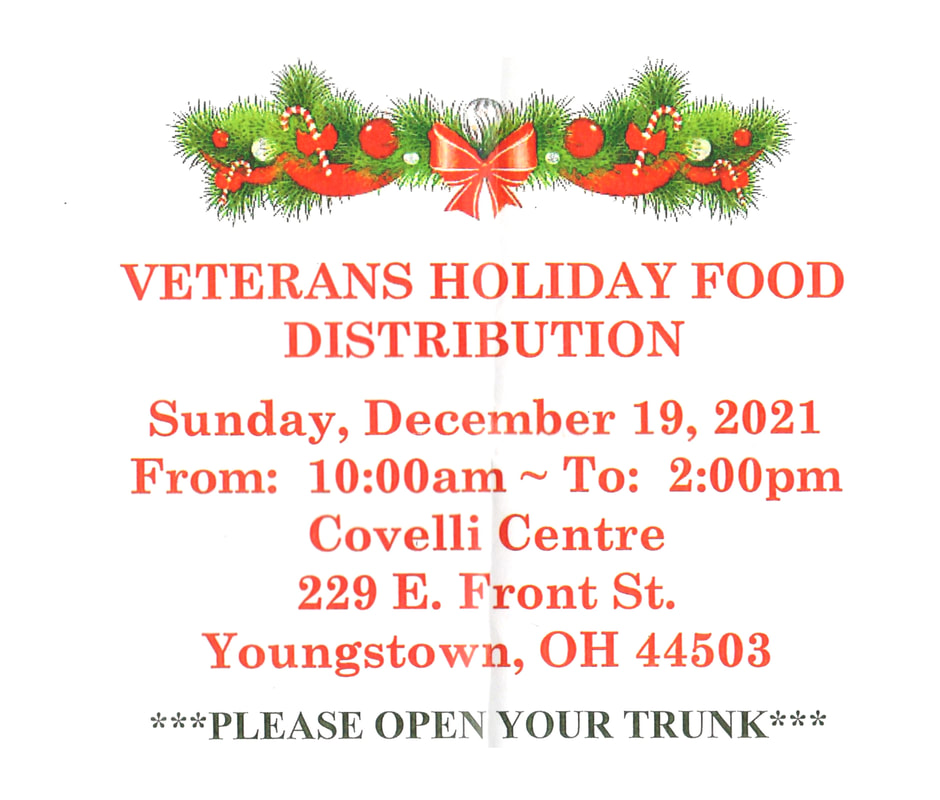 On January 21st and 24th, 2019, members of The Post interviewed nine (9) Canfield High School juniors who applied for consideration to attend the 2019 Buckeye Boys State.  Each of these young men acquitted themselves favorably and will be  nominated by Post 177. 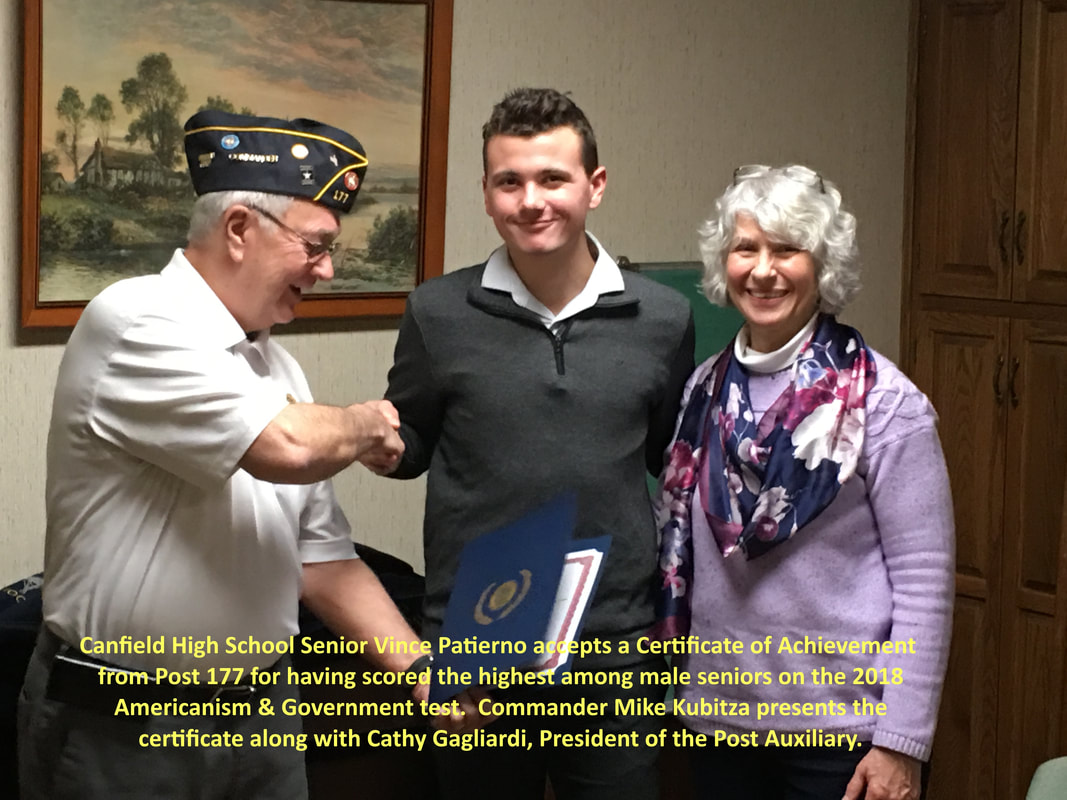 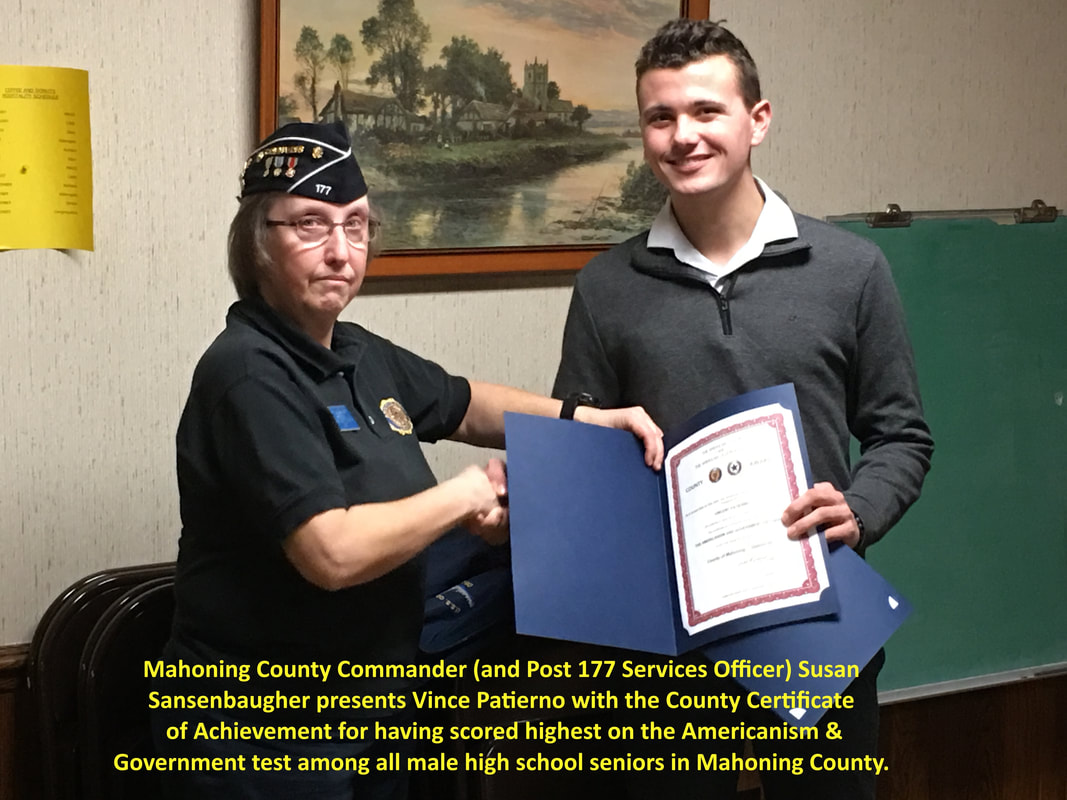 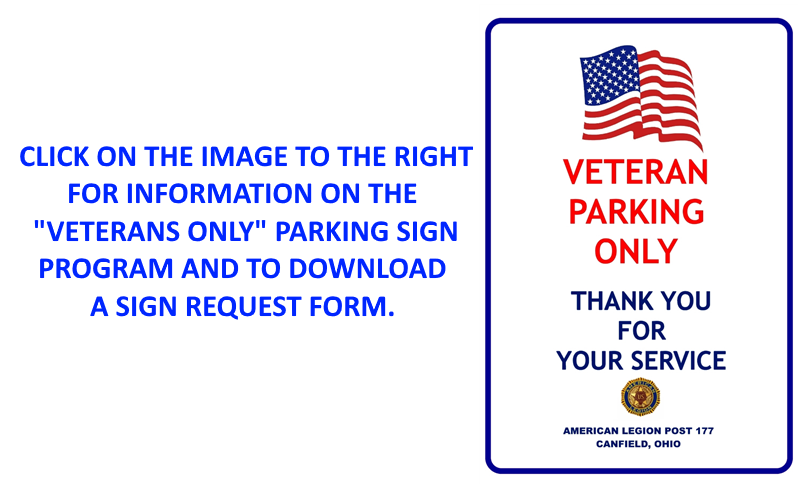